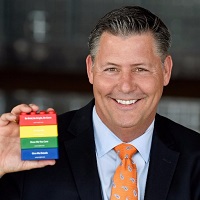 After starting, growing and selling 3 different businesses, Scott now delivers keynotes speeches, and trains financial professionals in selling skills and leadership throughout the world. He has spoken in London, Paris, Geneva, Scotland, Amsterdam, Shanghai and throughout North America. He has also lived with the Hadza and Massai tribes in Tanzania, adding to his global perspective. Scott's first business was in partnership with Tino Lettieri, called Tino's Inc. and after 3 years was sold to Schwanns in 1989. From 1990 until 2003 Scott built and sold Benchmark Learning, Minnesota's largest technology training company, and then from 2004 until 2014 he built and sold Insights Twin Cities to Insights Global in Scotland. He also learned great lessons on life and leadership as a TEC/Vistage member from 1995 until 2003, and has published three books, "I Think I'll Stand Up" a guide to success aimed at young adults, and his two newest books are GPS for Success, and Get a Job Fast, which is also free to download at www.GetaJobFast.com Scott has now personally trained and coached over 1500 CEOs as a Speaker for Vistage International, the world's largest CEO member organization, and trained several dozen of leadership teams running billion dollar business units. Today Scott and his team deliver increased sales, profits and productivity in some of the world's best companies, while traveling globally himself training teams, Leaders and Sales People, speaking to thousands, and hopefully reaching millions more via his live webinars and videos. If asked "What's your dream job?, Scott would say," EXACTLY what I do now" Is this true for you?